I briefly mentioned Heather Givans, owner of Crimson Tate and artist extraordinaire, on my last post.  I was so inspired by what she was doing to help JabuAfrica, that I took the opportunity to go to her fabric store on Mass Ave and get to know her a little better as well as dig a little deeper about how her connection with JabuAfrica came about.  First of all, if you haven’t been in the store, you need to go.  It’s eye candy for a color junky like me.  Her fabrics are beautiful, and although I can barely thread a needle, her store inspires me to want to learn more.  Thankfully she has sewing classes, which I did sign my eight year old daughter up for; she’s the real artist in our family!

Sitting with Heather at her rectangle table amidst fabric swatches, cupcakes, and her mom, I felt right at home.  She was gracious enough to share her story of how her connection to Africa began and led to her natural involvement with JabuAfrica.  It all began back in Heather and Sarah’s college days at Purdue, where they became friends.  Heather always had a desire to visit two places:  Africa and India, so when the opportunity arose for her to take a trip to Kenya, Tanzania, and Uganda, she jumped on it along with Sarah!  She spent the majority of her time in Africa in a remote village named Vihiga in Kenya.  There, she was hosted by a family whose home consisted of three huts constructed with a thatched roof and mud walls.  Heather’s enthusiasm for doing anything to help the family and be involved in their daily lives was palpable as she described her experience; she was ready and willing to do anything they needed and would allow her to do.  The family had a book stall in the nearby market where they sold paper, pens, and some books.  Their spirits were well and alive amidst their difficult way of life, and they were very accommodating to her as their guest.

Heather told me about a couple she befriended in Vihiga named Joseph and Zapora.  During Heather’s time there, Zapora suffered a miscarriage.  Unfortunately, there were no medical resources for Zapora as she endured this tragedy physically.  Heather described how she would ask Zapora what she could do to help, but Zapora knew that her only choice was to endure all of this just as she was.  In an effort to help subside her physical pain, let alone the emotional side, Zapora would break off chunks from the mud walls of her home because she knew that iron was strong in the mud and would help her body recover.  That was the best remedy she had available to her. 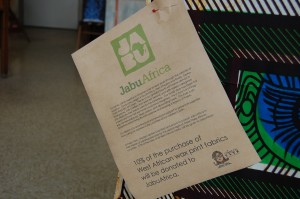 Heather said that her experience in Kenya made her realize that, “you should go to the end of yourself in your world to live.”  There’s much that we can all take from that.  We all are living in our own circumstances, and it is up to us to not only make the best of it but to go as far as you can go to live it fully. 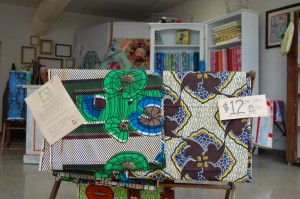 The JabuAfrica selection of fabrics displayed at Crimson Tate

Jumping to 2011, Heather’s desire to help JabuAfrica came about when she first opened Crimson Tate this past August.  She said she would frequently see this one particular woman pass by the store on her way to the trustee’s office, and one day the woman came in and expressed her love of fabric.  They began a conversation about how the woman was from West Africa, and she was currently doing all that she could to bring her husband to the US too.  The woman offered to bring Heather some textiles that she had from Africa, and it was then that Heather realized she could link her love of beautiful fabrics to further JabuAfrica’s mission.  So, she ordered fabrics from a manufacturer in Africa and there began her JabuAfrica display!

In speaking with Heather, it’s apparent that she’s passionate about her store being more than a store and that what she does is, “bigger than ordering fabric from Africa.”  Her shop is a place for constant conversation and where ideas and inspiration organically come alive.  First hand, I felt this as I sat with her.  I wanted to stay and talk and create something.  It was obvious to me that what she does and the tools she uses and ultimately shares, has a story behind it as well as having the power to tell a new one.  I was and am inspired. 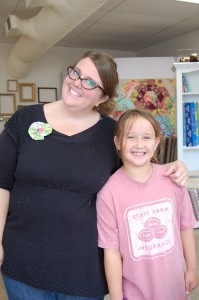 His strategy instead of asking do you want to go have a glance at this weblink outside.